In the third, and perhaps final, instalment of this saga (coughs), I finally bottled the wine. Part 1 can be found here, and part 2 can be found here. It had been on lees since April, with no racking or lees stirring. Time on lees can add complexity to wine, so although I’d originally planned to bottle the wine in May or June, the additional time on lees was most likely beneficial. No need to panic yet!

The hardest part,as is often the case, was cleaning. Since I am cheapskate, I was re-using bottles, which needed washing with water, and then with hot water and sodium metabisulfite in the form of a half a campden tablet. I also used the same food-grade bucket that had been used as a fermenter for blending. I emptied both demijohns into the bucket, along with half of a campden tablet, after tasting the wines to ensure that they had not spoiled or developed taints. Thankfully, neither had.

The wines were bottled using a funnel and some muslin as a filter. Despite this, a small amount of lees made it into the bottled wine, just enough to make the wine slightly cloudy. In the past, this would likely have been seen as a fault, but there has been increasing tolerance of cloudy wines in part due to the natural wine movement — so I wasn’t unduly worried by this. Thankfully, it was all a fairly simple task, and nothing went wrong. Even if it makes it a bit boring to read about…

The last task was to label the bottles. Since the grenache grapes were grown near Red Cliffs in the Murray-Darling region, I labelled it as a Murray-Darling Grenache. Most were labelled as ‘Maison Duley’, some with ‘Chateau de Bas-Beechmont’ as well. (I also noted the grape grower, as it was labelled on the crate of grapes I bought at the Rocklea Market).

So, the real question… how was the wine? Well, it seems good. The colour is a moderate to light strawberry/pink, which is quite good for grenache. When first bottled, it was still quite dominated by liquorice and medicinal characters, with raspberry and strawberry in the background, as well as some more yeasty, leesy character. There was also some stemmy, woody character in there too, presumably from the whole bunches. It was also quite carbonic and fresh, with some carbon dioxide still in solution.

After being left in a glass for a few hours, it seemed more fruity, with raspberry, strawberry, and maybe a hint of balsamic. The stemminess is still present, maybe providing some slightly herbaceous elements to the flavour, but is not dominant or over-bearing. The acidity is fresh and lively, and the tannins are very smooth and understated. Overall, I’m happy with it, and will see what it’s like after it’s like after a month or two. And it’s been fun — which, I guess, was the point…

It’s been about ten days since my last post, and since then I’ve pressed the wine into two 5 L demijohns. I made the decision to press when the ferments where almost dry. I had added the EC1118 a day before I planned to press, to ensure they fermented successfully to dry.

Wineries often use ‘clinitest‘ tablets to test for dryness, since refractometers don’t work well at lower sugar concentrations. These were originally designed for testing for diabetes, but helpfully are also perfect for wine. Lacking these, I used a dipstick test that may or may not also be effective for wine.

As predicted, pressing was an ‘interesting’ affair given the lack of an actual press, and one that took several hours. I initially began by attempting to press using the potato masher I’d been using to plunge the ferment, which did not really provide the level of pressure required. I ended up reverting to the age old technique of foot crushing — after cleaning my feet, I should add. In the event, it was a challenge to fill both demijohns; by the end I was pressing off maybe 20 or 30 mL at a time. Almost not worth it… The first demijohn received mostly free-run, plus some pressings, the second only pressings.

I was surprised — though I shouldn’t have been — that there were a lot of intact berries remaining in the ferment. I suppose I’m used to larger ferments, where the weight of the ferment would have crushed them. As a consequence, these berries released quite a bit of sugar back into the ferments, which restarted in the demijohns. Demijohns I had not bough air-locks for, so had to seal with clingfilm(!). Again, I should not have been surprised.

Intact berries can undergo intracellular fermentation, but this can only produce about 2.5% alcohol, at which point fermentation stops until the berry is crushed, and the yeasts can ferment the juice. This is not dissimilar to the carbonic maceration that is tyical of Beaujolais, but without the blanketing layer of CO2 — hence, it is often called semi-carbonic maceration. It is not uncommon in whole bunch ferments.

The free-run demijohn finished its primary ferment only a few days after, and I added another 25 g/L of sulfites. It is still bubbling slowly, however, so may have decided to undergo at least a partial malolactic fermentation. I have no way to test for this, however. This really is primitive winemaking!

The pressings demijohn is still bubbling away, two weeks after the ferments had first been inoculated. I’m used to inoculated wine ferments only taking 7 – 10 days, so I am somewhat surprised by how slowly it is progressing. I’m also beginning to wonder whether it is also undergoing a malolactic fermentation, which can occur concurrently with the primary, alcoholic, fermentation. Luckily, the grapes had plenty of fresh, lively acidity, so a malolactic fermentation would only help the wines.

It’s a bit hard to sample from the demijohns, so I don’t know how the wines are tasting. Hopefully, I will get to try them in April. As with any wine making, it is a matter of patience. 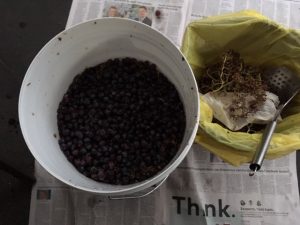 I have been wanting to try my hand at making my own wine for some time. I have, of course, helped others make wine numerous times, first during my oenology course at the University of Adelaide, and as a cellar hand. But I was always following someone else’s instructions, and had little input myself. Perhaps it’s an ego thing, but I wanted to try making a wine myself.

The problem for some years has been obtaining grapes. For years, I’d tried to grow them myself, but without luck. Perhaps it was the south facing slope, the lack of rain, or the poor (free-draining, eucalypt mulch) soil. In Sydney, at least, it’s possible to buy wine grapes from Flemington Market, and this is widely publicised. In Brisbane, there did not seem to be any equivalent… at least, not that I could find online. As it happened, there was. Eventually, I found that Ireland 53 at Rocklea Markets sells wine grapes for a few weeks in March, if you order in advance. Last year, I missed out by a few weeks. This year, I was ready…

After ‘phoning to confirm, I got up at 5:30 am to be at the market by 8 am on Sunday. I bought a crate with 20 kg of Murray-Darling grenache for AU$30. There wasn’t a choice, it was a matter of what was available at the time. The quality seemed decent — a bit of rot, but nothing too serious. I don’t have a refractometer, but the fruit tasted very sweet, and the juice was rich and delicious. Being grenache, it was safe to assume it probably at least 13,5° Baumé, which works out as approximately 14% potential alcohol. 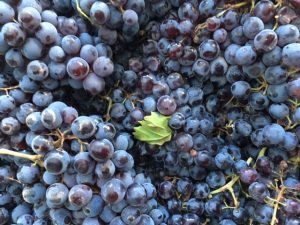 The first problem was to de-stem the grapes. Not having a de-stemmer (this was being done on the cheap!), I hand de-stemmed the grapes into a food grade 20 L plastic bucket, throwing in maybe a dozen or so whole bunches. The idea was that the stems would add some tannins and some structure, something which grenache can sometimes lack. 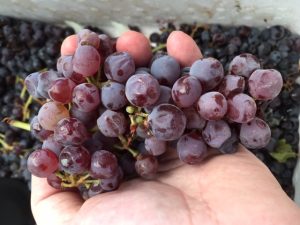 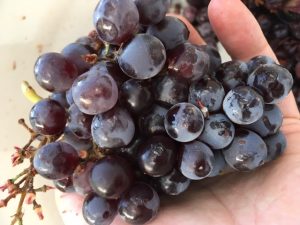 Interestingly, I noticed some of the bunches were more ‘gris’ than ‘noire’ in colour. This would be a phenomenon that would be more explicable in France, where I’d assume that a few vines of grenache gris were planted in among the grenache noir. Since grenache gris is rare in Australia, I assume it’s either within normal variation from grenache noir, or it’s something else altogether. Either way, the bunches were ripe and so went into the ferment… 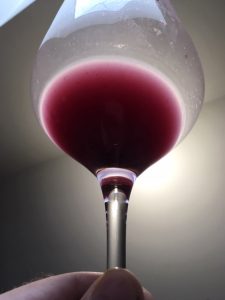 Finally, I crushed the grapes as best as I could, and inoculated with R56 yeast (with EC1118 on standby, in case the alcohol levels are too high for this particular yeast). A potato masher served to plunge the ferment. After a few days, the colour looked good, and the wine was starting to taste pleasantly of strawberries. So far, it had not gone volatile or oxidised (a problem with grenache in particular, and with small ferments in general). But, of course, that can always change.

The next challenge is pressing into barrel… given that I have neither press nor a barrel. While small presses and 10 L barrels are available, they are expensive. I am trying to do this on a budget, so I will improvise…